How to Make Great Apple Desserts
Without a Lot of Work 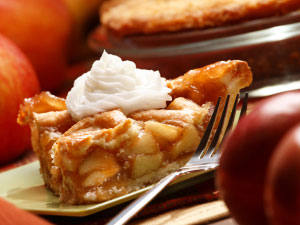 When we lived in Minnesota, when the nights began to chill, we sought out the little apple orchards hidden behind the bluffs along the St. Croix River. We enjoyed talking to the proprietors and discovered wonderful apples, varieties that you would never find in the store. It was at one of these orchards that I found my first Honey Crisp apples—still one of my favorites.

We reveled in the apples we found, eating them fresh and making giant mounded apple pies. It was obvious that the better the apples, the better the pies. Still, I would doctor those pies with lots of butter or sour cream and maybe throw in a handful of walnuts or cranberries.

But it's not just pies that we love; I love sticking chunks of apples in breads and cookies and coffeecakes. I like rummaging through apple recipes, trying new things. I love apple fritters, turnovers, and dumplings.

Today I'd like to share with your three keys to making great apple desserts—without a lot of work—and then a couple nifty recipes.

Key #1. Always start with great apples. Your dessert will never be any better than your apples. If those apples in the refrigerator are past their prime, throw them out. Don't try to make something with them. And make sure that your apples are cooking apples, not eating apples that will go soft in the oven.

Key #2. Do yourself a favor and get yourself a rotary apple peeler like The Apple Master. They only cost about $31 and they'll save you a ton of time. They peel, core, and slice so quickly it seems like an instant. Leave it set up and handy during the apple season so you reach for it just like a paring knife. The better models have a suction cup base so you don't even need to stop and clamp it down.

How many times have you felt like making an apple pie but didn't want to stand over the sink for 20 minutes peeling apples? A peeler will end all that.

Key #3. You have to have really good cinnamon. Cinnamon and apples go together.

Put a little cinnamon on your finger and taste it. If it doesn't taste good, don't put it in your pie. Cheap cinnamon will be astringent and taste like a drug store. Good cinnamon won't be sweet but it tastes like cinnamon should. You'll know the good stuff when you taste it and it will make a magical difference in your baking. We often double or triple the amount called for in the recipe—but you'll only do that with good cinnamon.

We keep three cinnamons in our cupboard: The best Korintje Cassia cinnamon we can find, a Vietnamese cinnamon, and a Sri Lankan cinnamon. A good Vietnamese cinnamon will have cinnamon oil in it that will remind you of "Red Hots” candies. It packs a punch and is incredibly aromic. When you want a cinnamon that will get your guests attention and make your kitchen smell like Martha Stewart's, use Extra Fancy Saigon Vietnamese Cinnamon (1/2 cup Glass Bottle). When you want cinnamon to stay in the background, use Gourmet Sri Lanka Ceylon Cinnamon (1/2 cup glass bottle). It has a mild, woodsy, fruity flavor. It's a refined cinnamon, not loud at all.

There are two other things that are "must haves” in my kitchen. I always keep Cinnamon Chips! (You choose: 11oz, 30oz, or 50 lb bags) and a just-add-water pie crust mix on hand. If I'm baking a coffeecake with apples in it, I'm going to throw in a handful of cinnamon chips. You'll surprise yourself how many times you add cinnamon chips to cookies, cakes, and scones.

And for that pie crust mix: Do you suppose your corner baker is mixing up his or her pie crusts from scratch? No, he's using The Bake Shoppe Professional Pie Crust Mix (Large 36 Ounce Mix). A mix just saves so much time and he knows you can't tell the difference. If we get serious about making an apple pie, we can have it in the oven in 15 minutes using a pie crust mix and an apple peeler. 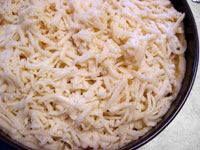 We had a lot of fun developing this recipe. It's not really a pie or a pastry but it is scrumptious. It's made with a rich cream cheese pastry on top and bottom with an apple cinnamon filling tucked in. It's a little more work than an apple pie but it's not hard and it is worth the extra time.

Check out the unusual topping. It's easy. It is made by freezing the pastry dough and then shredding it as you would shred cheese. We used an electric shredder attachment for our stand-type mixer and made quick work of the task though a box grater works too. Since you will need to freeze the pastry dough, make this ahead.