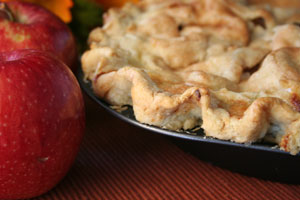 My grandfather had a big orchard. At least it seemed so to us boys. We spent hours in that orchard—climbing trees, checking out bird nests, eating green apples, and doing what boys do. The outer row of trees had peach and plum trees and I don't remember what else. We didn't spend much time in that row. The inner rows always beckoned, more secretive and better to explore. There was a giant, gnarled apricot tree with spreading branches that was easy to climb. There was a whole row of apple trees—Jonathans, Winesap, and I don't remember what else. In the far corner of the orchard was a pillar of a pear tree with branches so thick and tall that it was difficult to climb and with a tangle of low plum bushes behind and along the fence. Beyond the plums and pears were the sand lots with sagebrush and scattered ponds with lots of frogs and an occasional jack rabbit. It was a boy's paradise.

I remember picking apples at the end of the season with Mother and my brothers. "It's going to snow," she said. "We have to get all we want."

The skies were leaden and we kept sticking our hands in our coat pockets to warm them up. The wind found its way through the orchard to bite our noses and turn our cheeks red. But the apples were incredibly good--cold, crisp, and sweet. We picked bushels to take home and store in our covered porch where we could have them until late in the winter.

I learned how to bake apple pies from my mother. I don't recall her using a recipe. She would roll out the dough and line a pie pan. She would toss peeled and sliced apples in cinnamon, sugar, and flour. She would load up the pie pan and place chinks of butter over the apples before covering it with a top crust. In my memory, her pies were the best.

Rarely do I use a recipe when I make an apple pie. I just load and bake as my mother did. But I'm prone to add ingredients that my mother often didn't have—bright red cranberries either fresh or dried, golden raisins, sour cream, or caramel sauce—whatever sounds good at the moment. I have a choice of cinnamons; she had whatever was at the store. She would put one of her boys at the sink peeling the apples; I use an Apple Master. I don't think my pies are as good as the memories of my mother's pies but I like them and I like making them.

How to Make a Fully Loaded Apple Pies

You can freelance your apple pies or you can start with a recipe and then add what you want to it. Here you will find a list of suggested ingredients like sour cream, dried cherries, and walnuts. You'll find quantities but you can add more or less—it's your pie.

The top crust always seems better if it's slathered in butter and coated with a sprinkling of sugar and cinnamon. You'll find a choice of cinnamons here.

This is a good recipe to use as base. It makes a nice rounded pie. Add more goodies to it. If it stacks higher, so much the better.

Be sure and use a 9-inch Professional Nonstick Pie Pan so that the crust bakes and is not soggy.

We recommend the The Perfect Pie Crust Shield to protect the edges from burning so that you're not tempted to remove the pie from the oven before the apples are tender and bottom crust is baked.

Use a Victorio Apple Peeler with Suction Base to peel and slice your apples. Not only will it save you a lot of time but your slices are uniformly thick so that they bake uniformly.

The Bake Shoppe Professional Pie Crust Mix (Large 36 Ounce Mix) will save you more time and give you a tender professional crust every time.

Apples and cinnamon are essential companions. You have a choice of three cinnamons.

Suggested additions with which to load your pie: