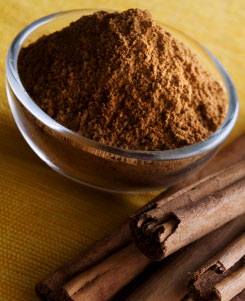 My mother made bread nearly every week. Often, she took part of the batch and made cinnamon rolls, bread dough wrapped around a mixture of cinnamon, sugar, and butter. They were luscious. In my memory, that's my first affair with cinnamon and I've been in love with cinnamon ever since. With experience, I learned that nothing will make such a magical difference in your baking as a really good cinnamon.

Today, I'll help you choose a very good cinnamon. You'll learn of different types of cinnamon and you'll learn how much to buy and how to store it. And I'll tell fourteen ways that you can fancy up those cinnamon rolls you make.

There are three types of cinnamon to consider: Korintje Cassia cinnamon, Vietnamese cinnamon, and Sri Lankan or Ceylon cinnamon.

Vietnamese (Saigon) cinnamon also come from the cassia tree but it has a very different tone resulting in a different experience when baked. Botanically, it is the same but is harvested and processed differently resulting in the different flavor. It is stronger and spicier with more cinnamon oil flavor. This is my favorite cinnamon in apple pies and apple desserts.

Ceylon (Sri Lankan) cinnamon is a true cinnamon coming from the cinnamon tree. In some parts of the world, it is preferred over cassia cinnamons. It is less pronounced in flavor and has a more citrus overtone.

Which cinnamon should I buy?

So which do you buy? We recommend all three so that you can match the distinctive flavors to recipes that you are using and the result you are trying to attain.

Korintje cassia is less expensive and can be very good. Be certain that you buy premium or grade A cinnamon. Look for the volatile oil content; that's what gives cinnamon its flavor. It should have at least 2% volatile oil. (The cinnamon that we sell does.)

Shelf life: How much should I buy?

You have probably noticed that you can buy spices in bulk for much less than in small quantities. Handling and packaging is expensive. If you are confident in the quality of the cinnamon you are purchasing, buy it in quantity. However, keep in mind that cinnamon will lose its potency. As it becomes older, you may have to use more of it to get the same flavor in your goods. We recommend buying what you can use in a year.

Ideas for Your Next Cinnamon Roll Project

And now for those fancy ways to make cinnamon rolls: Mix your rolls as usual but add any of the following to your filling.

1. Cranberry Nut Sweet Rolls. Use dried cranberries and walnuts in the filling. Add a little orange zest to your filling.

4. Fruit Filled Sweet Rolls. Use a commercial fruit pastry filling with your sweet rolls. We sell apple, raspberry, blueberry, cherry, and lemon. Alternatively, make your own filling with fresh fruit.

7. Chocolate Fudge Sweet Rolls. Add cocoa to your dough and some extra sugar or add cocoa and chocolate chips to your filling. Frost your rolls with a thick chocolate ganache.

9. Jammy Sweet Rolls. Use your favorite jam or jelly in the filling.

12. Pear and Pecan Sweet Rolls. Add dried pears and pecans to your filling.

14. Coconut and Pecan Sweet Rolls. Add shredded coconut and pecans to your filling. Use brown sugar in the filling and omit the spices.