How to Make a Foolproof
Omelet in Five Minutes 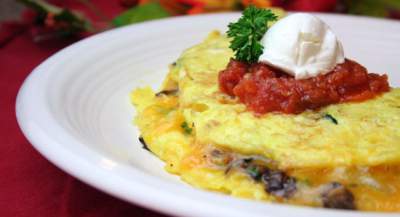 This is the omelet for the omelet challenged. Never make an ugly omelet again. It's nearly foolproof, it's simple, and it's quick.

We set off to make the best and easiest omelet, something that even a beginning cook could master. We bought ten dozen eggs and started testing methods. At the end, we were making five minute omelets—a little unorthodox but very good and nearly foolproof. We called them "five minute omelets." You really can cook them in five minutes. And the method is easy.

If you've ever made an omelet that didn't fold well or broke apart or had a tough skin, consider this method. 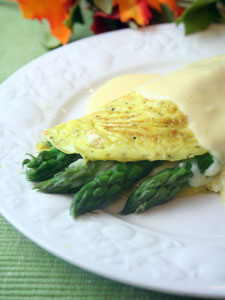 Getting the omelet to cook through without overcooking the skin is a challenge. You can lift the edges of the omelet as it cooks to let the uncooked egg flow under the omelet and onto the pan surface. You can put a lid on top to trap heat coming from the hot pan. But for some omelets, that isn't enough.

A surer method is to start scrambling the eggs when they hit the hot pan, stopping when the eggs are partially cooked. Then pat the eggs into a smooth layer and let them finish cooking without a lid. It works. It's quick and easy.

Instead of folding the omelet in the pan, simply tip the pan and let the omelet slide onto a plate. As the omelet slips onto the plate, twist of the wrist, and fold the omelet onto itself on the plate. (It's easy to do; in two or three tries, you'll have the method mastered.) This method worked so well that we declared a victory. We recorded our methods, developed a couple of recipes, and described the method in an email.

Later we started placing a plate over pan for just a couple minutes once we stopped scrambling and then removing the plate before the omelet was cooked. That accelerated the cooking a little and gave us warm plate on which to serve the omelet but we didn't leave it on long enough to hide when the omelet was done.

We had perfect omelets in five minutes.

How to Cook an Omelet Using this Method

Choose the right size pan. A three-egg omelet requires an eight-inch pan. The pan should be nonstick.

Whisk the eggs together in a bowl.

Put a pat of butter in your nonstick pan. Place it on medium-high heat. On our stovetop, a high BTU gas burner, that's 6 out of ten. Heat the butter to just short of brown and swirl it around the pan.

Pour the eggs into the hot pan. Salt and pepper the eggs.

Scramble the eggs with a soft silicone spatula scraping the bottom of the pan and the sides. The eggs will cook quickly and curds will form.

When the eggs approach the consistency of cottage cheese with mostly solids but some liquid egg, stop stirring. Use the spatula as a paddle to pat the eggs down into an even layer. Place a plate over the top of the pan. The plate will trap heat and help cook the top of the omelet. It also warms the plate so that you can serve the omelet on a warm pan.

Let the eggs continue cooking until the liquids are set and the top of the omelet is cooked.

Place the fillings in a row across the omelet just off to one side. For most fillings, you will want them cooked. The omelet should slip around in the pan without a hint of sticking. Move the pan to a plate, tip the pan on angle over the plate, and gently shake the omelet onto the plate filling side first.

When the omelet is about half way onto the plate, twist the pan with your wrist folding the remaining omelet over that on the plate. The omelet should be folded over with the bottom edge protruding about one-half inch.

Unless you're going to make larger omelets, you'll need an eight-inch skillet which is the perfect size for a three-egg omelet. It needs to have a good nonstick surface so that it will slide out of the pan easily. If you are making larger omelets, you will need larger pans.

You'll also need a good silicone spatula to stir the eggs as they begin to cook and to slide under the omelet and loosen it if it starts to stick.

Get an eight-inch pan and start making foolproof omelets.