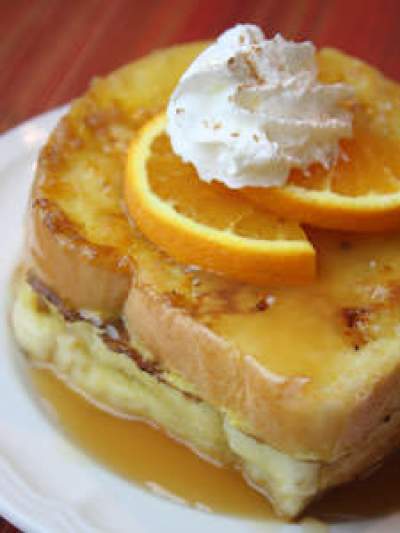 In the mornings, I want French toast. But I usually put apricot syrup on mine or maybe some really good jam. And I prefer chewy, hearty breads or maybe a sourdough, not Anna's soft white breads. Breads with oats are particularly good—I like the chewy texture that oats give.

How to Cook French Toast

At its simplest, French toast is merely sliced bread dipped in an egg and milk batter and then fried on a griddle. (We usually add a generous amount of really good cinnamon. See the section on tools and ingredients for choices of cinnamon.) The egg batter, because it is mostly eggs, is a custard and sets up like a custard. The proteins in the eggs don't coagulate until they reach 150 to 160 degrees and so to avoid soggy centers, the bread needs to cook until the center reaches that temperature.

If you can make a sandwich, you can make stuffed French toast. Simply put a filling between two slices of bread, dip the sandwich, and cook it. Because it is thicker and you have to drive the interior temperature to 150 degrees or more, turn the heat down just a bit and then cook it twice as long.

We made sandwiches with cream cheese filling and with pastry filling and deep fried them. Those visiting our test kitchen that day found the deep fried concoctions much better than those cooked on the griddle.

By the way, the deep fried peanut butter and jam sandwiches were very good. If you make them, sprinkle them with a little powdered sugar and serve them with maple or cream syrup.

We would be remiss if we didn't mention crusted French toast. I think Debbie discovered this. She spread cherry jam between two slices of bread, dipped the sandwich in egg batter and then in chopped pecans, and cooked it on the griddle. She had pecan-crusted, cherry French toast. It was very good.

You can let your imagination run wild on this one. Coconut instead of chopped tree nuts is very good. We found some little candied coconut sprinkles and used them in place of the nuts. The sugars in sprinkles melted into a very nice, candied crust. But alas, we can't get any more of those little sprinkles.

You probably have the equipment that you need for cooking French toast on the griddle: whisks, turners, and a griddle. If you are deep frying, a Fry Daddy is convenient although we typically use a large pot with a clip-on candy thermometer.

We would not think of making French toast without a selection of cinnamon. Most often, we use the best Korintje Cassia cinnamon we can. It's amazing what a difference a good cinnamon will make. (If you've been stuck with inexpensive grocery store cinnamon, throw it away. You should be able to dip your finger in a good cinnamon and taste it and it won't be astringent and mediciney.)

Vietnamese or Saigon cinnamon has more cinnamon oil in it. It is incredible and we use it a lot, especially with apples. The flavor is much more pronounced than in Cassia. You deserve to have some in your cupboard. You will use it often.

Ceylon or Sri Lanka cinnamon is much more subdued, almost with a fruity tone. We use it in buttery pastries and such where we do not want the cinnamon to be too outstanding. We have a hard time keeping Sri Lanka cinnamon in stock but if we have some, pick it up.

You need great syrups and maybe jams for your French toast. We use fruit syrups a lot but the real find was cream syrups. They are made with a cream base and are thick and rich. They complement rather than compete with fruit fillings. As of this writing, we have maple cream, cinnamon cream, coconut cream, and vanilla cream syrup. The vanilla cream syrup is very much like a caramel syrup.

And if you're going to be serious about stuffed French toast, you need. They come in everything from Bavarian cream to raspberry. They come in two-pound squeezable tubes, are inexpensive, and leftovers will keep for a very long time in your refrigerator.

One Saturday morning we were making stuffed French toast in our test kitchen. (We call them classes but mostly they're an excuse to clown around and feed people.) Mostly we were using pastry fillings but made some with cream cheese fillings. Every once in a while, you hit an "ah-ha moment” when you find something that is hands down the class favorite. It was a mixture of blueberry filling and lemon filling in a stuffed French toast. 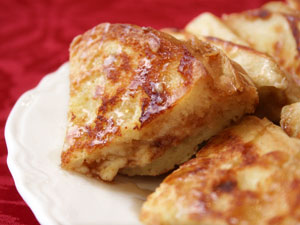 This is an unusual recipe with flour added to the egg and milk mixture, more like a tempura batter.

You can use this basic recipe and mix in three or four tablespoons of your favorite jam or jelly instead of the chips. 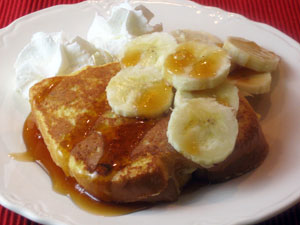 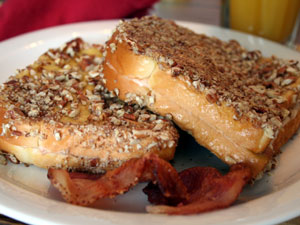 Stuffed French toast is always a treat. This one is stuffed with a mixture of cream cheese and cherry jam, and then crusted with pecans. (We considered calling this Cherry Cheesecake, Stuffed, Pecan-Crusted French Toast but that seemed a little long.)

This is easy to make. Make a sandwich with the cherry cheesecake filling, dip the sandwich in egg, and dredge it in chopped pecans. 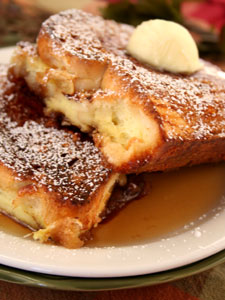 This recipe is one of Melissa's favorites.

It's a soft, French toast made by layering the bread and egg mixture in a baking pan the night before and baking it in the morning. It's almost a bread pudding layered with caramel syrup.

This is "bed and breakfast good”—and so handy. Because you mix it up the night before, it's easy to make on a busy morning. We're so glad that Melissa shared this recipe with us.

This baked French toast is made up the night before in an 8 1/2 x 13-inch pan. In the morning, you just pop it in the oven.

Let it bake while you are getting ready for the day and you'll have a wonderful breakfast for your family.