From the Pumpkin Patch to the Kitchen:
Favorite Recipes

I fell in love in Fairbanks, Alaska—the land of the midnight sun—with the sweetest girl in the valley. All five of our children were born there. We lived on a three-acre plot overlooking the Tanana Valley and the University of Alaska; a plot that backed up to old mining claims. With the kids, Merri Ann and I wandered those mining trails and explored old diggings. On our lot, where the slope banked into the summer sun, we cleared off the birch trees for a garden. We hauled in a truckload of peat and tilled it into the soil making it rich and thick. And then we read everything we could about gardening in the far north.

With banked beds, ground cover to capture the summer heat, and over-ambition, we were awash with summer produce. We had beans and peas and broccoli. On the deck in planter boxes, we grew tomatoes—ripe by the Fourth of July. Potatoes thrived. We built a room to store potatoes, squash, and canned goods. But we never grew pumpkins.

That didn't mean that pumpkins didn't thrive in the valley. Prize winners at the fair were over 50 pounds. But these were show pumpkins, not the sweet little meaty pumpkins that you want for pies. These we bought at the farmer's market or at the store.

In this article, I'll tell you about pumpkins, how to choose them and puree them and I'll share great pumpkin recipes with you. 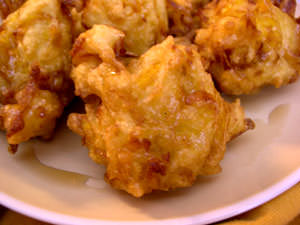 Pumpkins are versatile. You can bake a pumpkin, steam a pumpkin, sauté a pumpkin, make puree out of a pumpkin, and more. But where a pumpkin really comes into its own is in your kitchen. Pumpkins make favorite pies, moist cakes, interesting breads, and delightful cookies. The flavor is mild, maybe a little earthy. Typically, pumpkin is the canvas for an array of spices. When we think of pumpkin, we think of mixtures of cinnamon, nutmeg, ginger, and cloves found in pumpkin pie.

When choosing pumpkins, select those that are firm and heavy for their size. Avoid those with soft spots or any signs of decay. Inspect carefully any areas that may be soiled with dirt from the field. The rind should be hard. Choose one that is small enough to use at one time since cut pumpkins will not keep as well.

In the right conditions, your pumpkins will keep for two or three months. Store them in a cool, dry location. Space them so that the air can circulate around them. Ideal temperatures are 50-55 degrees.

Once you cut into a pumpkin, it should be refrigerated. Chunks can be kept in your crisper where the atmosphere is moist or in perforated plastic bags for a week or more.

For longer storage, cook your pumpkin, puree it, and freeze the puree. Properly frozen, your puree will keep in the freezer for six months. Raw pumpkin can also be frozen. Clean and peel the pumpkin. Cut the flesh into one-inch cubes. Place the cubes in freezer-type bags and freeze. Measure out what you need for your favorite recipes. Use within two months. 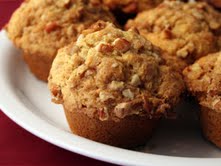 Pumpkin is mild and it's gently earthy flavor is often used as palette to deliver other flavors--most often, spices. The most common spices are cinnamon, ginger, nutmeg, and cloves. Cinnamon is the mildest of the quartet and often hides behind the others. Yet, many times, I prefer to use cinnamon alone. A really good cinnamon melds perfectly with pumpkin.

Korintje Cassia Cinnamon This is the most popular cinnamon used in the United States. A good cassia is pleasant, not astringent, and you can dip your finger in it and taste it. If you have a good cinnamon, you can use much more than what the recipe calls for—two or three times as much.

Sri Lanka Cinnamon This is a very mild, sweet, woodsy cinnamon—a true cinnamon. It almost has a honey tone to it. It will get lost behind stronger spices like cloves or nutmeg but melds perfectly with earthy pumpkin.

Vietnamese Cinnamon This is an exciting cinnamon. It packs a punch and fills your kitchen with sweet aroma when baking. Vietnamese cinnamon has more volatile oils and has a tone associated with cinnamon oil more than the ground spice. I love this cinnamon in an apple pie. You don't need cloves and nutmeg when you use this spice.

How to Puree Fresh Pumpkin

Can you use fresh pumpkin instead of canned?

Yes. We prefer fresh but we suspect that we're biased. Quite frankly, in many recipes, we have a hard time telling the difference. And we often use commercially canned pumpkin for the convenience.

1. Cut a sugar or pie pumpkin in half. Remove the seeds.

2. Place the halves in a baking pan, flesh side down with 3/4-inch of water in the pan. Bake for 1 1/2 hours at 350 degrees or until the flesh is tender. (For small quantities, you can cook the pumpkin in the microwave.)

3. Let the pumpkin cool until you can handle it without burning. Scoop the flesh out of the pumpkin and place it in a blender, food mil, or food processor. Process until smooth. If you have a Victorio-type strainer, you can process the cooked pumpkin with the skin. The strainer will separate the skin from the pulp.

Often, especially from smaller or immature pumpkins, the puree will not be thick enough—a spoon should stand upright in the puree. To thicken, place the puree in a saucepan and cook, stirring often, until the puree becomes thicker.

This is one of Merri Ann's favorite pumpkin recipes. We've been making these fritters for a long time. These make wonderful breakfast fare but we've served them often on chilly fall evenings served alongside a soup or a salad. Mostly we have served them drizzled with maple syrup but they are also wonderful with cinnamon apple syrup, maple cream syrup, or cinnamon cream syrup.

You deep fry these pumpkin fritters just as you would French fries. The fritter batter mixes together quickly so this is a quick dish to put together for those evenings when you just don't have a lot of time. It's also very economical. 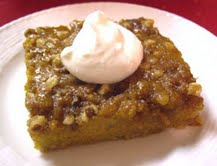 When we were first married, Merri Ann started making Pumpkin Pie Squares—I think from an old Farmer's Home Journal recipe. Over the years, we tweaked it a little here and there and adopted it to different sized pans.

It's like a pumpkin pie on a baking sheet with pecans added and has been a go-to recipe when we've needed to feed a crowd.

Except for Ben who doesn't like nuts, our kids prefer this over pumpkin pie. 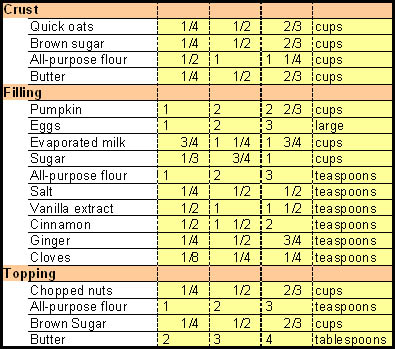 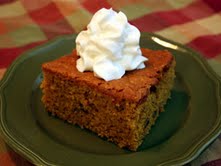 Pumpkin has a neutral, earthy flavor. Typically we rely on spices to deliver the flavor—most notably, cinnamon. I recent years, we've taken to adding cinnamon chips to our pumpkin recipes from pumpkin bread to cookies. The burst of cinnamon in every bight is delightful.