How to Make Italian Sausage 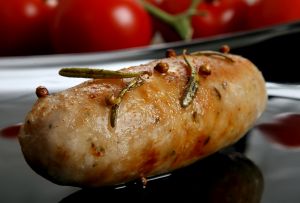 Pork butt. Are you done giggling yet? Good, because this rectangular cut of pork from high on the shoulder is all business. Also called "Boston butt," and "pork shoulder butt," the name comes from the casks in which they used to store and ship valued cuts of pork, not so much from the location of the pig itself.

And that's right: "valued cuts of pork." The ideal cut for making Italian Sausage (or any other sausage, for that matter), the butt naturally has the perfect 70 30 ratio of meat to fat, which makes for deliciously meaty and moist sausages - either free-form or in casings, options which will be discussed later. Most butchers and grocery stores already take care of this, but if you do buy a pork butt that has the skin on it, you want to use your sharpest knife to shave off the skin until you get to the creamy white lard layer beneath it. Also, if you have to do this, you probably want to check the narrow end of the cut - on the pig, that's the side where the head was - for a large, brownish gland. It's easy to locate, and easy to remove; the bad news is, it just as easily ruins a sausage, too, so get rid of it.

And the bone. Take out the bone. Meat grinders hate bones.

So, now that you've got this hunk of pig meat on your counter, what next?

First off, if you're going to make Italian Sausage, you're going to need a lot of space and a lot of equipment. Any counter space is fine, but everything else needs to be as cold as possible both before and during your sausage making event. And it is an event, as it can take some two-and-a-half to three hours for your sausage to go from hunk to link.

Keeping your equipment and ground meat cold serves two purposes: one, bacteria hate cold weather, and two, cold meat and cold fat bind better to one another. If your ground pork comes to room temperature, the meat and fat will separate, and when you cook your sausage - especially if you put it into links - you will get a dry, crumbly texture. If it's cheap sausage and you don't care, that's one thing, but if you're going to put some effort into making this, you may as well make the best you can, right?

And one last thing: you're going to make a lot of sausage here. Don’t panic; it freezes well, and is delicious in so many applications. When it comes to sausage making, you get just as many things dirty making one link as you would a hundred, so why not make five pounds at a time? If you can’t possibly fathom eating that much sausage, give it away to friends and family; it sure beats socks!

Below is a list of the things that you will need to have ready before you begin making your sausage (much of which is not an absolute necessity, but will make this endeavor a little more convenient and enjoyable):

Remember: you're dealing with raw meat and lots of dishes, so keep everything as cold and as clean as possible. Don't be in a rush, or you could get careless and make a mistake around a meat grinder. In Spanish, they call that "no bueno."

First things first: put your grinding knife, cutting plates, and grinding worm (that thing that drives the meat to the blades) on a plate and shove them into the freezer until ready for use.

Using your sharp knife, cube your meat to a good size, small enough so that you don't have to mash anything through the feed tube of the grinder. Yes, most meat grinders come with that broomstick handle (a.k.a. "the stomper") that lets you push meat through, but "encouraging" it through is far different from "forcing" it through. You can do that, sure, but why risk any injury?

Weigh out five pounds of the meat onto your scale, add your seasonings (typically fennel and coriander seeds, red pepper flakes, hot paprika, salt, pepper, and dried oregano and basil), lightly toss everything with your hands, and then shove the mixture into the fridge for about forty-five minutes. Again, we want to keep everything as cool as possible to keep bacteria at bay.

(If you are adding fatback - that brilliant white layer of hard fat from just beneath the back skin of the pig - then cube that up as well. It will help you to cool it for about an hour before cubing; cold fat back is easier to cube than room temperature fatback. In this case, cube four-and-a-half pounds of the meat, and then add eight ounces of fatback to complete the five pounds.)

Utilizing what counter space you have, get a large stainless steel or glass mixing bowl, and set it in either a larger bowl or bucket with enough ice, water, and salt to come about halfway up its sides. Then, get your meat mixture out, assemble your grinding parts and begin grinding.

If it's an electric grinder, get ready for what sounds a little bit like a song playing on a radio with no bass. If it's mechanical, prepare to do some cranking; it's tougher to push that meat through than you'd think. Either way, unless you have one of those super grinders they use in processing plants, it can take a good bit of time to get all five pounds of meat through the die and into the bowl. In any case, feed the meat slowly through the feed tube, allowing it to come to the top, but not cram up at the top. Again: no forcing this stuff down the hole.

Work in small batches if you must; all those turning parts cause friction, and friction creates heat... the very heat you're trying to avoid. If the moving parts begin feeling warm, take them off the grinder, rinse them, and re-cool them in the refrigerator for half an hour, along with the meat itself (both ground and unground). This is a labor of love here; you may have to work like this until you get the hang of your grinder and the sausage making process.

Now that you've gotten all your meat and seasonings through the grinder, add the meat to the mixing bowl of the mixer you plan on using. Using the paddle attachment (that thing that looks like the head of a shovel, but with holes), mix on medium speed for one minute. This not only helps disperse the seasonings evenly throughout the meat, but it helps develop the proteins in the meat so that they can stick to themselves.

This point - when the meat actually looks sticky - is known as the primary bind, and it is here when you can add wine, red wine vinegar, or water to the mixture. Wet ingredients - added ice cold - not only help distribute the spices, they help ensure a more moist finished product. Also, if using vinegar or wine, the liquid itself functions as a seasoning and - in the case of red wine - a coloring agent as well. If adding wet ingredients, add them and mix at medium speed for an additional minute, until everything looks well incorporated.

Once you've achieved the primary bind, you can sample it. Take a spoonful (refrigerating the rest) and throw it into a skillet over medium heat with a little olive oil. When cooked, taste it, but remember to busy yourself with checking for seasonings, though, and not patting yourself on the back, Big Guy.

Encasing your Italian Sausage is completely up to you. There are many very traditional Italian recipes that call for free form sausage that has never seen the inside of a hog's casing; sauces and pizza toppings come to mind. But if you insist on feeding your mixture through another machine and into some hog casings, that works, too.

You'll need roughly two feet of hog casings per pound of sausage meat, but it is a good idea to have a few extra feet handy in case you need them. Just be sure that your casings are clean and void of any color or foul odor. Without getting too disgusting, they're hardly from an area of the animal someone would deem "clean."

And buy the salt-packed casings. Salt kills bacteria, and though it dries out the casing, the casing itself is easily reconstituted after some serious rinsing under running water. Hold the casing up to the water and fold back the opening to let the water run through. This not only washes excess salt and debris from the casing, it gives you a chance to check for holes. The last thing you want when feeding your sausage into the casing is to have that casing break, and have sausage spill out all over the place.

Whatever meat stuffer you choose to use, be sure to wet the stuffing tube first, slide over the wet casings, and then slick the work surface so that as the meat fills the casings, it slides across the counter effortlessly. You want the sausage coming out of the stuffer to push the already-made sausage along with as little resistance as possible.

Measure off however many inches you want your links to be, and twist in opposite directions to tie off each link, working your way from the front (first-out sausage) to the back. If any air pockets present themselves, make a slight incision with a sharp knife to let the air out.

Refrigerate or freeze your sausages, wash and sterilize all your counterspace, and call it a day: you're done making your Italian Sausage.

DO NOT COOK YOUR SAUSAGE ON A GRILL UNTIL THE SKIN BURSTS. This is a major problem; instead of treating your sausage as an afterthought, treat it as though it were a finer cut of meat. Sure, you paid a lot less money for it, but you put a lot more effort into it than you would had you, say, went to the supermarket and just bought yourself a tenderloin from the meat department.

No. Cook your sausage to an internal temperature of 150 - 155 degrees F, checking with a meat thermometer on occasion. This will keep the meat moist and not crumbly, and it will kill any microbes it may have picked up along the way.

Serve with grilled onions and peppers, and a little bit of rustic bread or some al dente pasta, and you will be in hog Heaven!