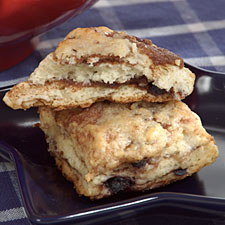 These tender, buttery scones feature a thick, rich swirl of cinnamon through their center. Because of their moist cinnamon filling, they remain soft and fresh longer than most scones.


This page may contain affiliate links. See our Disclosure Policy for more info.