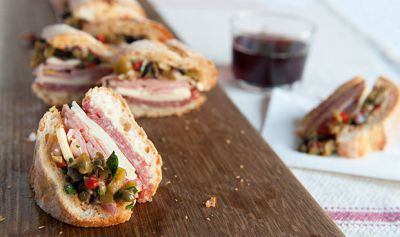 The muffuletta hails from New Orleans, where they know a thing or two about food ...and parties. Swapping the traditional round loaf for a baguette makes this classic sandwich appetizer-friendly. Leftover olive salad is delicious on crostini with goat cheese.

As an Amazon Associate, I earn from qualifying purchases at no additional cost to you. Thank you for supporting Recipe Goldmine.