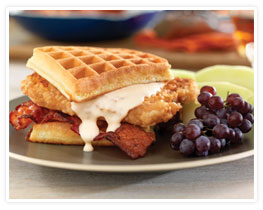 Serving Suggestions: Good for breakfast, lunch, or dinner, these waffle sandwiches are also nice with your favorite jam or jelly instead of the yogurt mixture, and with a sausage patty instead of the bacon. You can also serve them as open-faced sandwiches. On the side, try fresh fruit or breakfast potatoes.