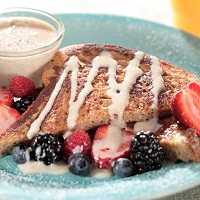 Recipe and photo used with permission from: Nestlé and meals.com

Join our group at Gab

Weekly Specials from The Prepared Pantry