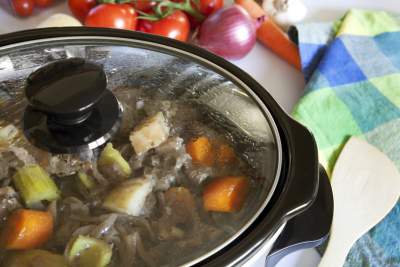 The food safety concern surrounding any crockpot is its ability to reach a temperature above 140 degrees within four hours. Since bacteria grow rapidly between the temperatures of 40 and 140 degrees, it is of great importance that food not to be in that range for more than four hours in order to limit this growth.

When cooking meat or poultry in the crockpot, make sure it is completely defrosted and cut into small pieces. These appliances were not made to help thaw or cook large pieces of meat or poultry. If unthawed meat/poultry or large pieces of meat/poultry are placed in the crockpot, they will not reach 140 degrees quickly enough and possibly result in a foodborne illness.

If you cut up the meat/poultry and vegetables the night before, make sure you store them in separate containers in the refrigerator to limit bacterial growth and to avoid cross-contamination. Because vegetables take longer to cook in the crockpot, place them on the bottom and the sides. Add the meat, then the liquid, such as broth, water or sauce. Fill the crockpot no less than half-full and no more than two-thirds full. Lift the lid only occasionally to stir the food and check for doneness.

While it is safe to cook food on LOW all day, it is suggested, if possible, that you place the setting on HIGH for the first hour to help the temperature reach 140 degrees as quickly as possible.

Crockpot baking is very simple. The supplies needed are a crockpot (naturally) and a 1-, 2- or 3-pound metal coffee can. A double thickness of paper towels may be used as a cover for the can.

Most recipes require that the can or manufacturer's insert be greased with solid vegetable shortening. Cans should only be half full of batter. This will allow for rising. Heat needs to be well circulated. This is done by allowing a little space all the way around the can. If a metal rack is not available to put under the can in the crockpot, foil may be crushed to 1-inch thickness to allow for heat movement. High is the best setting for crockpot baking. Lifting the lid during baking is only allowed near end of baking time to check for doneness. Any earlier peeking will let necessary heat escape.

Use pot holders or folded paper towels to remove can or insert from crockpot. To more easily remove cake or bread from can, open bottom with can opener and push food out.

Any leftovers should be placed in shallow containers and in the refrigerator within two hours after cooking is completed. Although it is not advisable to reheat leftovers in a crockpot, you can place foods that have been reheated to 165 degrees on the stove top or grill or in the microwave or oven in a preheated crockpot.

Many preparation steps are not necessary when using a crockpot. For example, vegetables do not need to be sauteed or browned. In addition, all ingredients can be added at the beginning of cooking with the exception of milk, sour cream or cream, all of which should be added during the last hour of cooking.

Liquids do not boil away as they do in conventional cooking. You may need to reduce the liquid by half. There are exceptions to the rule - such as soups and recipes with long-grain converted rice (1/4 cup liquid per 1 cup of rice).

Note: Most uncooked meat/poultry and vegetable combinations will require at least 8 hours on LOW.

Join our group at Gab

Weekly Specials from The Prepared Pantry