All About Sourdough, page 1 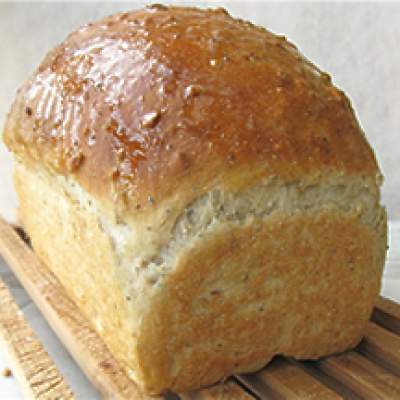 Sourdough. Whether it conjures up a crusty, flavorful loaf of bread, or a bubbling crock of flour/water starter, sourdough is a treasured part of many bakers’ kitchens.

Flour and water, mixed together and left alone, come to life and become something truly amazing: sourdough. Faster and more convenient leaveners exist today, it’s true. Yet none of them has the allure of sourdough. Perhaps it’s because sourdough starters, for ages the only means of leavening bread, have been treasured and passed down among bakers for generations.

If you can imagine a world without any manufactured yeast – the world of a century ago – you can see how important sourdough starter was. To the early prospectors, a starter was such a valued possession (almost more than the gold they were seeking), that they slept with it to keep it from freezing on frigid winter nights.

There are many distinct varieties of sourdough throughout the world; we’ve chosen to examine typical American-style sourdough here, because it’s easy to work with and familiar to many of us.

There are scores of self-proclaimed sourdough experts out there, each willing to share with you the “secret” to sourdough. Problem is, these “secrets” are often completely contradictory. Sourdough is an area of enormous controversy, as well as firmly held ignorance.

One business claims you can only capture the elusive wild yeast by buying their special packets. A cookbook author has you set out a bowl of grapes and leave them untouched for two weeks, hoping the yeast will spring to life on its own.

“Scientific” bakers hold that sourdough bread can’t be made without a thorough understanding of the symbiotic chemical relationship between yeast and lactobacilli. At the same time, people made bread with wild yeast for millennia – so how complicated could it be? These wild swings between science and superstition make the sourdough sphere more intimidating than it needs to be.

We know that it’s yeast and lactobacilli – not magic – that leaven and flavor sourdough bread. We also know that temperature and hydration (the liquid/flour ratio) are important. But bakers’ intuition is as essential to sourdough success as pure science. We see the same flour/water combination behaving differently from one time of year to another (or even from day to day); and it’s as much experience as science that teaches us what’s going on, and how to adapt.

So look at this guide as one way of approaching sourdough. It’s not the only way; there are literally hundreds of others. Consider this simply one more brick in the wall of sourdough baking.

what is sourdough, anyway?

Sourdough refers both to bread, and the starter used to make it. Sourdough starter begins with a combination of flour and liquid. The proportion and type of flour and liquid can vary dramatically, from a stiff starter made entirely with rye flour and water, to a liquid batter of milk and cornmeal, and everything in between.

Friendly bacteria (lactobacilli), present in our natural environment; and the wild yeast attracted to and living on flour (particularly whole grain flour) begin to work with one another when flour is mixed with warm water. The result: sourdough starter. These tiny living creatures (collectively called the sourdough’s microflora) generate byproducts that cause bread to rise and give it complex, rich flavor.

how does sourdough make bread rise?

Wild yeast is a tiny fungi. It exists all around us in varying degrees – in the air, settled on work surfaces, and in some of the ingredients you bake with: most importantly, flour.

Lactobacilli are also all around us. They have a wonderfully symbiotic relationship with wild yeast, the result of which is high-rising, delicious bread.

How does it all work?

where does sourdough bread’s flavor come from?

As byproducts of manufacturing simple sugars, lactobacilli produce flavorful organic acids: lactic acid, which adds a rich, mellow flavor to bread; and to a lesser degree over a longer period of time, acetic acid, which gives sourdough bread its sour tang.

By varying the hydration of your starter, and the temperature at which it's fed; as well as the temperature and duration of a sourdough loaf’s rise, you can make sourdough bread that’s richly flavored, with barely a hint of sour; or one that’s truly mouth-puckering.

Recipe and photo used with permission from: King Arthur Flour