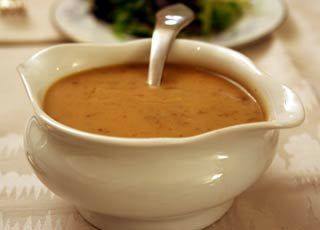 If using giblets in your gravy, refer to the instructions below for preparation.

Remove the cooked turkey and roasting rack from the roasting pan. Pour the poultry drippings through a sieve into a container. Add 1 cup stock (poultry, meat or vegetable) to the roasting pan and stir until crusty brown bits are loosened. If you do not have homemade stock, substitute canned broth, but it is not as good. For example, if you are making turkey gravy, use chicken broth. Pour the deglazed liquid/stock into the container with the pan drippings. Let the mixture stand a few minutes until the fat rises to the top.

Skim and discard any fat that remains on top of the poultry drippings, reserving 3 to 4 tablespoons. Or alternatively, cook about 6 slices of bacon until crisp, and use the fat from the bacon.

Over medium heat, spoon the reserved fat into a 2-quart or larger saucepan. Using a whisk only (to prevent lumps), whisk an equal amount of flour into heated fat and continue to cook and stir until the flour turns golden. To produce a full flavored gravy, you must cook the flour in about an equal portion of fat until the flour has lost its raw taste (as you would a roux). A common problem is using too much flour, which decreases the flavor.

Gradually whisk in warm poultry drippings/stock mixture. Cook and stir until gravy boils and is slightly thick. Add finely chopped cooked giblets (as below). Remember the gravy will continue to thicken after it has been removed from the heat. A good rule is to use between 1 and 2 tablespoons of flour for each cup of liquid and then give the mixture time to thicken.

If you require more gravy, use a little melted butter and extra warmed poultry stock to increase the volume of the pan drippings.

For an extra rich gravy, add about 1/4 to 1/2 cup cream. You can also add vegetables such as cooked onion or mushrooms for variety.